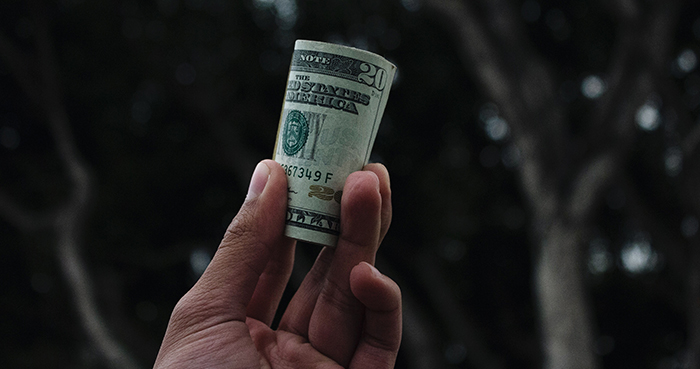 “Things are tight.” “Money is scarce.”  “We’re ‘off budget’ again!” Have you ever heard or maybe used phrases like these yourself? Maybe recently? Has your financial path gone flat?  Are you financially on a downward trajectory instead of an upward angle? I visited quite a few businesses and churches last year and prayerfully evaluated why some had increase and were growing, while others were in economic decline or experiencing fiscal plateaus.

From time to time, we all experience financial slow-downs or occasional setbacks. That’s common and normal.  But when the overall consistent trend is a flat line or worse yet, a steady decline, you need to do something fast. And I mean really fast.

A persistent plateau or a slow downward slide, when ignored, inevitably turns into a plunge, like the first drop on a roller coaster. When that happens, an agonizing road lies just ahead for the ministry, business, or individual…unless action is taken to turn it around quickly.

Unfortunately, most people execute exactly the wrong things to turn it around. They make costly blunders. God promises increase, not cutbacks in Psalm 115.

Psalm 115:14
The Lord shall increase you more and more, you and your children

1. Thinking “cuts” instead of increase.

The first action typically is taken when a pastor or business owner sees a financial decline is to begin in a panic, based on fear, looking for places to cut. The cutbacks may seem to be the right path to pursue however they almost always generate an entirely different effect.

Reinforcing a Mindset of Decrease rather than Increase

What continual cutbacks do is to reinforce a mindset of decrease instead of increase.

In churches, it affects members. In businesses, it affects customers. When customers (or members) start observing the belt-tightening, fewer services, and inventory reductions, their giving decreases and so do their purchases.

For example, suppose you own an auto parts store known for customer satisfaction. Your customers are accustomed to always getting what they need because you have them in stock. But, to downsize your inventory and maximize your cash flow, you start making cuts in inventory, thinking, “Well, if someone needs a part, we’ll just order it for them. This will be easier on us.”

Now, a regular customer comes into your store and finds out you no longer carry the part he needs, but you can order it for him. He’s stunned.  You always had those parts on hand. He thinks, “Well, if I have to wait three or four days for my part to arrive, I might as well go online and start ordering the parts myself.” He feels like he’s lost convenience and simplicity because of your cutback decision. You made the cuts so things would be easier for you, but not for the customers you serve.

There’s a good chance you’ve lost his future business along with perhaps 20-25% of your good customers. Now your cash-flow problems worsen.

People, in general, want value. If they feel that value has diminished, they go elsewhere. Customers and church members, when perceived value has dwindled, will direct their money to ministries and businesses that they perceive to be growing, expanding, and providing them value.

If you must cut, begin with the things that are not perceivable, and only those things the Holy Spirit specifically identifies. By responding to the Holy Spirit, you’re not leaving Him out of your decisions.  He will provide creative ways to present the cutback as being value-adding to the member or customer.

Leave out God, and you’re on your own

The consequences of thinking cuts instead of increase are easily predictable. When people perceive that momentum or value to them is waning or dying, their money will go somewhere else. It’s that simple. And, thus, your core problem becomes exacerbated, and the finances descend further.

So the first costly blunder is thinking where to cut instead of how to increase. To increase wealth, you must increase value.

2. Downsizing instead of rightsizing.

First, comes the cutting. Next, comes the downsizing, all in the name of “good stewardship” or “being wise.” These two costly blunders go hand-in-hand.

When the downsizing journey is charted out, the finances end up following the same chart. Yes, there are times for pruning and cutting waste, but when “cutbacks” and “downsizing” becomes a way of thinking, it’s almost impossible to muster any real faith in God’s promises for growth and expansion. You start seeing only what is instead of what God said it should be.

Thoughts of decrease can only attract more decrease

Proverbs 23:7
For as he thinketh in his heart, so is he

In just the past two decades, an amazing scientific discovery proved that the human heart has a little brain. I remember being with Dr. Gary Smalley before he went to heaven. He was reveling over this discovery because it proved Proverbs 23:7 to be absolutely true and accurate. In essence, it says, “we become what we think about most often.”

The heart has a brain, and the brain has a heart. God knew about the brain neurons in the heart long before science discovered this fact. After all, he created us. This discovery confirms an important principle:

Your inner kingdom will always become your outer kingdom.

In other words, if your inner kingdom is one of increase, your outer kingdom will increase.  And it works for businesses as well as for churches and families. Genuine, pacesetting leaders will think increase, because, based on Scripture, thoughts bring attraction. This brings us to Blunder Number three.

3. Acting on the thought, “Something must be wrong with me.”

It’s easy to feel like you are failing when you face temporary setbacks. But if you believe the lies coming to your mind, the setback will become permanent rather than temporary.

James 1:7-8
For let not that man think that he shall receive any thing of the Lord.
A double minded man is unstable in all his ways.

James was speaking to a group of Christians. He exposed them to a very important principle. You can be saved, but if you are double-minded, you can expect to receive nothing from the Lord. If you believe in your mind/brain but don’t believe in your heart/brain, you have a double-minded condition.

The Lord has a passion to be believed, not just in our minds, but in our hearts. Look at the power He has placed within you:

Deuteronomy 8:18
But thou shalt remember the Lord thy God: for it is he that giveth thee power to get wealth…

Ephesians 3:20
Now unto him that is able to do exceeding abundantly above all that we ask or think, according to the power that worketh in us.

You possess, as a gift from God, the power to get wealth. St. Paul tells us that power is working in you. Do you believe that?

God did not give you “the gift of wealth,” but the gift of the power to get wealth. In context, he’s speaking about physical wealth like silver and gold. When you, in faith, use that gift properly, you are then rewarded with increase.

Suppose a generous father gave his two sons each a forty acre farm, complete with all the implements for farming. Both sons, Luke and Cletus, are grateful and very appreciative of their generous father. Now they each have an equal gift from their father. Cletus thanks God and begins speaking over his 40 acres, commanding them to produce. He thinks and speaks about the harvest, but never takes action by planting any seeds. Luke, on the other hand, thanks God, prays for a bountiful harvest and believes God will honor his faith. Then he begins plowing and planting. Now, let me ask you a question. Which son will get the reward of harvest? Both possessed the gift, but only one used the gift successfully, and that was Luke.

In a similar fashion, God has given you the gift of “the power to get wealth.” In fact, every believer in covenant with God through His Son, Jesus Christ, has that gift. But only a handful actually put action in utilizing that amazing gift. And the handful that do put action to the gift, get the reward of wealth and increase.