A Phone Call—And a Visit to Heaven 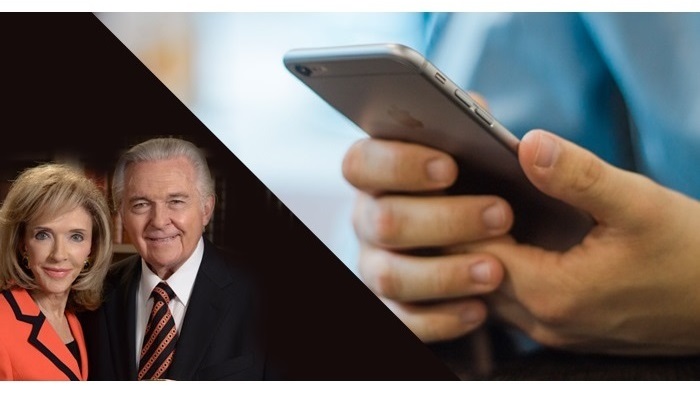 My phone rang as Mary Jo, and I waited to board our flight to Oakland, California. I looked at the caller ID, and it read, “REXELLA VAN IMPE.” Well, at that point my heart dropped because Jack just went through two years of devilish health attacks, and he had already told me he wanted me to officiate at his funeral. So, understandably, I thought the worst.

“Dave Williams,” I answered. “Dave, is Mary Jo with you?” a young man’s voice asked? “Yes, she is,” I said with caution. “Okay, good. I have something wonderful to tell you both.”

At this point, I was trying to figure out who was calling me on Rexella’s phone when suddenly I realized it was Dr. Jack himself. I could barely believe my ears. You see, for the previous two years, he didn’t want to talk much, and when he did his voice was low and muffled. The enemy had attacked him with a heart issue, and he almost died. It looked hopeless, but thanks to Rexella’s faith and the prayers of his partners, he pulled through. For several days, he didn’t know who he was and couldn’t remember any of the 14,000 Scriptures he had memorized.

Then a miracle! Everything came back, and Jack was able to return to his global television program. But it was short-lived. We had just enjoyed breakfast together in Troy along with some of his board members, when Jack went home and fell, breaking his hip in four places. Painful surgery ensued and months of rehabilitation. Whenever we were able to talk, his voice was very low and he seemed distant.

So, you can imagine my surprise to hear this young-sounding Jack Van Impe on the phone as I sat at the airport. “I have something important to tell you and Mary Jo.” What followed was astounding.

An Angel in the Van Impe Home

“For the past few weeks, an angel has been appearing at my home. When I ask, ‘Why are you here,’ he vanishes. Then last night after watching the service when I preached in your church and 3000 came to Christ, I laid down and was caught up to the third heaven! Brother Dave, I had the same experience the Apostle Paul had in 2 Corinthians 12!”

Dr. Van Impe continued, “I talked with Jesus for an hour and a half (earth time), and then He sent me back. Oh, Dave, He told me what’s coming and gave me instructions about my role in these last days. Oh, Brother, it’s revival! When I came back, I rededicated my whole life to Jesus and called my office to tell them to stop working—we’re going to have a prayer meeting.”

As Jack spoke to me, I could feel rivers of living water in my belly. Jack Van Impe is a new man again! “Brother Jack,” I said, “I’m on my way to Santa Cruz, Oakland, and Turlock for meetings and a big conference. May I share this?”

“Yes, yes, yes! Tell everyone. Jesus is coming very soon, and we have to get the word out. We must warn the world and comfort the Church! There’s coming a great revival, and Jesus told me what my part will be.”
Jack went on and told me of his new global plan as it was laid out to him by Jesus, Himself.

Now my head was spinning; he was talking like an excited teenager. Jack is off television, but still bringing the latest headlines as they relate to Christ’s coming through his YouTube Channel. Because pastors and church leaders have never been taught how to understand prophecy and teach it, nearly 300 Bible schools will now require students to take courses on Revelation using Jack’s book, Revelation Revealed. I was so happy, I felt like dancing. Jack is back!

To get news updates and watch prophecy updates go to JVIM.com. If you are a partner with Jack Van Impe Ministries, please continue your loving support. God will bless you for being a part of this great revival, even in parts of the world where we cannot send missionaries.