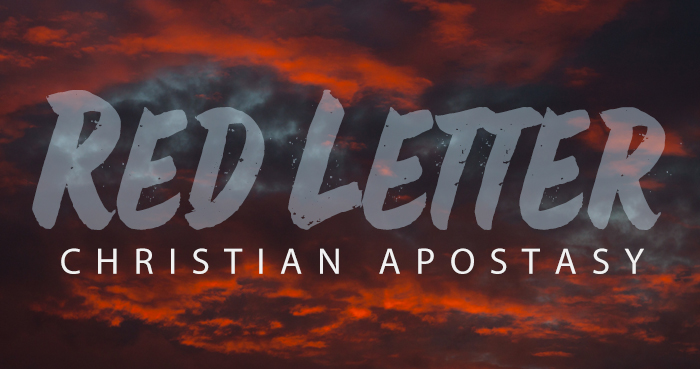 2 Thessalonians 2:3
Do not let anyone deceive you in any way. For that Day will not come unless a falling away comes first, and the man of sin is revealed, the son of destruction

The Greek noun for “falling away” is apostasia. The Liddell and Scott Greek Lexicon defines apostasia first as “defection or revolt.” It describes a “forsaking.” By any stretch, it appears that the Christian world in general has arrived at the point of defecting from the true faith the apostles taught and adhered to.

In red letters, Jesus Himself warned about deception that could lead to apostasy, and ultimately suffering the same fate as this world one day shall.

Matthew 24:4
Take heed that no one deceives you.

Matthew 24:11
And many false prophets will rise and will deceive many.

And in the black letters of the Bible, we are also warned:

Romans 16:8
For such people do not serve our Lord Jesus Christ, but their own appetites, and through smooth talk and flattery they deceive the hearts of the unsuspecting

1 Corinthians 6:8-10
But you yourselves do wrong and defraud, and do this to your brothers.  Do you not know that the unrighteous will not inherit the kingdom of God? Do not be deceived. Neither the sexually immoral, nor idolaters, nor adulterers, nor male prostitutes, nor homosexuals, nor thieves, nor covetous, nor drunkards, nor revilers, nor extortioners will inherit the kingdom of God.

For example, when the Supreme Court of the United States gave the okay to same sex marriage, many of the “Red Letter Christians” rejoiced.  “After all,” one spouted, “Jesus never mentioned anything about homosexuality.”  Okay, I agree. Jesus did not specifically mention homosexuality, but He did say, “Have you not read that He who made them at the beginning ‘made them male and female” (Matthew 19:4).  In other words, he created two genders: male and female. Two, that’s all. Only two.

In reading over the “Red Letter Christian” articles, I find plenty of political, social, and leftist agenda, but no Gospel. Here are some examples:

Getting eschatology (prophetic studies of the end times) wrong in one area can lead to apostasy.

One of the articles appearing on “Red Letter Christians” promoted the idea that Muslim hatred toward us is America’s fault.

Jim Wallis of Sojourners, Tony Campolo, Jack Heller, Rob Bell, and others who are climbing up the religious mountain of influence, are being featured and applauded by socialist and leftist media, including Oprah. On Oprah’s show, Bell dismissed the words of Scripture and criticized churches that were determined to be faithful to God. The Charisma headline read: “Rob Bell Trashes the Bible on Oprah”

I don’t question their sincerity or their moral character, at least not publicly or openly.  But, I personally would not want to be under the spell of men who twist or ignore the clear words of God in His Book, the Bible. God knows best, and He knows something we don’t know.

The predicted apostasy is here and is now picking up steam.  Let’s you and I believe God for amazing miracles and show the world who the true and living God really is, like Elijah did.  And expect to be ridiculed and threatened, like Elijah was. But God was with him.

Determine to keep your faith, share your faith, and know your faith will protect you in God’s grace. You may feel like you’re alone, but there will be remnant of believers in these last days pursuing God’s presence, preaching that Jesus Christ is still Lord and God’s Word is true—from Genesis through Revelation.