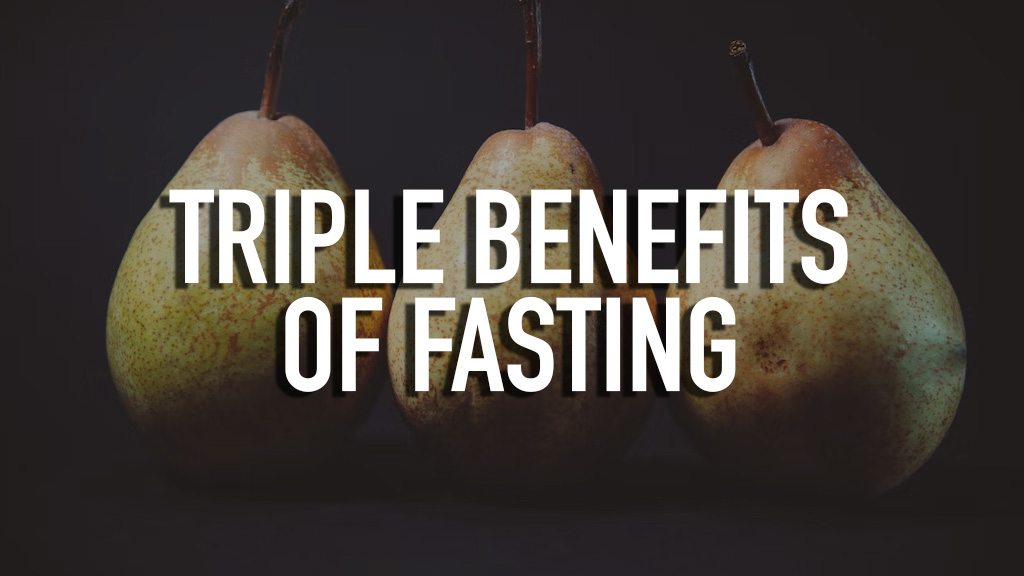 When you think of fasting, do you imagine someone with hollow cheeks, sunken eyes, and a somber demeanor? 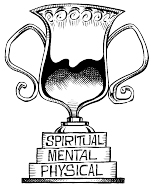 Do you picture someone on a hunger strike to protest some global injustice?

Or, do you picture someone who is vibrant, alive, with a new light in their eyes, and a bounce in their step?

That’s really what fasting should produce. It’s a biblical practice that has not one, not two, but three amazing benefits that happen to us all at once.

What is fasting? Simply put, it’s abstaining from something, usually food, for a certain period of time. The word “fast” in Hebrew means to put your hand over your mouth. In Greek, it means to abstain from something, normally food.

The amazing thing about fasting is that it affects all three parts of our being. Paul said that each individual is made up of three parts: spirit, mind, and body. We are each a little trinity, a reflection of God. Most of the things we do in life affect only one or two parts of our being:

The practice of fasting seems to hit all three areas equally. It has triple benefits. It impacts all three parts of us in significant ways.

The first century church knew about the triple benefits of fasting. From time to time they called corporate fasts for specific purposes, and they also had regular times of personal fasting. One Bible dictionary said that early Christians fasted regularly on Wednesdays and Fridays, but after about a century, it became routine, and some were doing it to gain honor with men. So rather than temper the abuses with the proper use of this miraculous gateway to the supernatural, some of the church fathers discontinued it, and the power of fasting was lost.

Today people are realizing the triple benefits of fasting again and are reviving the practice. I have spoken with many believers who feel a personal conviction to start fasting regularly, and I know of many churches who embark on fasts together. I believe we have come full circle, and as the first century church practiced fasting, the end-time church is now practicing fasting.

Fasting In The Bible

Notice Jesus didn’t say “if you fast” but “when you fast.” Fasting should be a regular, healthy discipline of the Christian faith just like praying and reading the Bible.

Other great men and women of God fasted. In Luke, chapter two, we get a glimpse of Anna, an elderly widow who spent her life in the temple praying, fasting and worshiping God. She was a prophetess and considered fasting and prayer her full-time ministry. We don’t know if she fasted certain meals or if she fasted for days on end, but we do know fasting was such a prominent part of her ministry that the Holy Spirit forever enshrined her faithfulness in the description of her in Luke’s Gospel.

Anna’s fasting led to one of the great moments in the Bible when she came to Mary and Joseph and prophesied over the infant Jesus. Anna must have considered her years of fasting a small service compared to the honor God gave her of encouraging Jesus’ parents and foretelling the great mission and ministry he would accomplish.

Luke 2:38b (NIV)
…she gave thanks to God and spoke about the child to all who were looking forward to the redemption of Jerusalem.

Anna became one of the first New Testament evangelists in the Bible!

Fasting was known even by non-Christians to be a powerful spiritual practice. Cornelius, a Roman centurion who didn’t know Jesus yet, sought God through fasting and prayer with amazing results.

Acts 10:30–32
And Cornelius said, Four days ago I was fasting until this hour; and at the ninth hour I prayed in my house, and, behold, a man stood before me in bright clothing,
And said, Cornelius, thy prayer is heard, and thine alms are had in remembrance in the sight of God.
Send therefore to Joppa, and call hither Simon, whose surname is Peter; he is lodged in the house of one Simon a tanner by the sea side: who, when he cometh, shall speak unto thee.

God sent Peter to Cornelius, and the whole household was saved. It became a major turning point when the church understood that God was pouring out his Spirit on non-Jews too. I can’t help but notice that fasting brought the visitation to Cornelius. Maybe it was his way of showing God how earnest he was to know the truth.

Early Christians also used fasting as a way of seeking God’s will. In fact, Paul’s ministry began with a season of fasting.

Acts 13:1–3 (NIV: italics added)
Now in the church at Antioch there were prophets and teachers: Barnabas, Simeon called Niger, Lucius of Cyrene, Manaen (who had been brought up with Herod the tetrarch) and Saul.
While they were worshiping the Lord and fasting, the Holy Spirit said, “Set apart for me Barnabas and Saul for the work to which I have called them.”
So after they had fasted and prayed, they placed their hands on them and sent them off.

Fasting was the normal practice the early Christians used to send out missionaries like Paul and Barnabas, but it was also how they chose local church leaders. When Paul and Barnabas were in Galatia, they demonstrated this.

Acts 14:23 (NIV: italics added)
Paul and Barnabas appointed elders for them in each church and, with prayer and fasting, committed them to the Lord, in whom they had put their trust.

Perhaps you feel like your ministry has never moved forward. Or maybe you haven’t had the clarity of mind and spirit to recognize what he is telling you to do.

Have you had trouble finding your place in the local church? Have you bounced from one thing to another without settling down? Maybe God wants to kick-start your ministry during a time of fasting.

When you invest in yourself by fasting, you receive triple returns for your spirit, mind, and body.